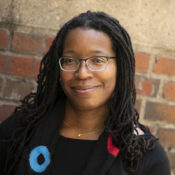 Tiya Miles, Ph.D., serves as the Michael Garvey Professor of History and Radcliffe Alumnae Professor at Harvard University, where she offers courses on African American women, Native American women, abolitionist women and “Black Indian” histories and identities. She is the author of six nonfiction books, the most recent of which, “All That She Carried: The Journey of Ashley’s Sack, a Black Family Keepsake,” won the National Book Award for Nonfiction and was named one of the best books of 2021 by The Washington Post, New York Times, Slate, Vulture, NPR, The Atlantic and other publications. 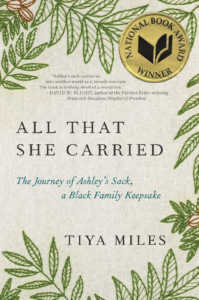 “All That She Carried” traces the history of a cotton bag through generations of Black women in America. In 1850s South Carolina, an enslaved woman named Rose gave the sack filled with a few precious items to her daughter, Ashley, as a token of love when the 9-year-old girl was separated from her mother and sold. Decades later, Ashley’s granddaughter, Ruth, embroidered this family history on the bag, including Rose’s wish that “It be filled with my Love always.” In the book, Dr. Miles carefully unearths these women’s faint presence in archival records to follow the paths of their lives — and the lives of so many women like them — in a singular and revelatory history of the experience of chattel slavery, and the uncertain freedom afterward, in the United States.

A Midwesterner originally from Cincinnati, Dr. Miles earned her bachelor’s degree in African American literature from Harvard, her M.A. from Emory University and her Ph.D. in American studies from the University of Minnesota. Dr. Miles has published essays in The Boston Globe, The New York Times, the Dallas Morning News, The Atlantic and Time magazine.